When it comes to flooring, hardwood has a way of tying together a room with elegance and style, but it’s the long-lasting durability that makes it well worth the investment. That durability is exactly why most professional and college basketball courts are made with the incredibly dense hard-maple wood found across the upper Midwest. With March Madness around the corner, we’ve put together a few of our favorite College Basketball courts from across the nation.

When sunny South Florida comes to mind, you can’t help but imagine the sandy beaches underfoot and the leafy green palm trees swaying in the tropical breeze overhead. In 2013, FIU brought those Miami staples onto their court with bright green palms on either end and the sandy sea shore at the very top of the design, a clear ode to their home town.

Given the kind of love Boise State enjoyed for their blue field, it’s no wonder Bakersfield’s bold blue-top court was just as well received when updated in 2011. The deep blue background provided the perfect backdrop for their golden-hued additional designs, court elements and, of course, their logo. 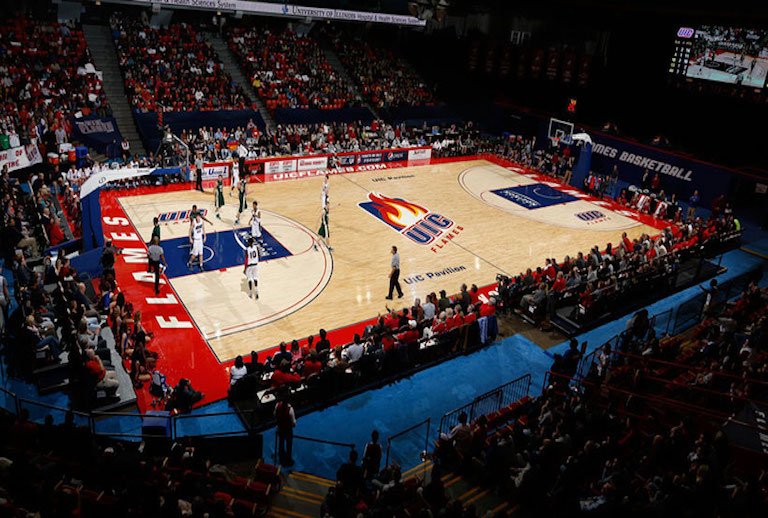 Updated for the 2012 – 2013 season, UIC basketball fans got to enjoy a new look along with improvements to some of the equipment. The new design features a red boarder surrounding the court, the team’s primary logo in the center and their secondary logos near the corners. Though it’s not the flashiest court on this list, the crisp and clean design is definitely worth noting. 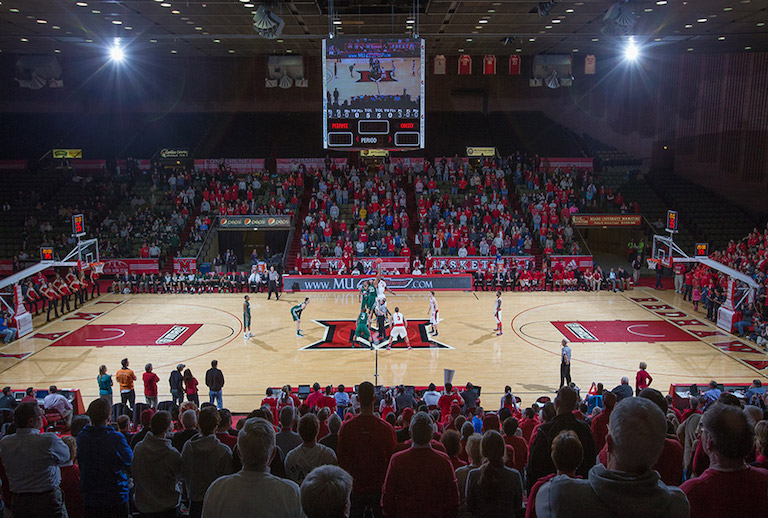 Like many other teams on this list, the Redhawks court underwent renovations in 2014. The new arena includes new red seats (a much needed update from the previous green), better lighting and, best of all, a brand new court. The new design is notably sharper than its predecessor and, in turn, is much more eye-catching. The brighter shades, better lighting and new graphics come together to create an undeniable clean-cut court.

By placing a large shamrock and their iconic logo right in the center of the court, the Fighting Irish brought forth their roots with a brilliant new design. The dual-toned hardwood and deep blue details combined with the Notre Dame accents truly make the Purcell Pavilion a stand-out court. 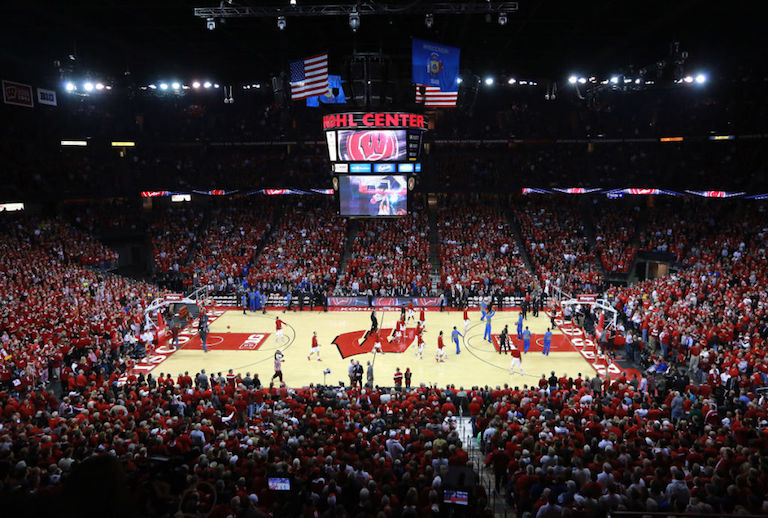 The Badgers received their subtle but necessary update in the summer of 2015. Though the differences may be missed by some, they truly do make all the difference. The new darker wood finish provides the perfect backdrop for the team’s red with white accents and gives the big, bold “W” space to stand out and wave at center court. 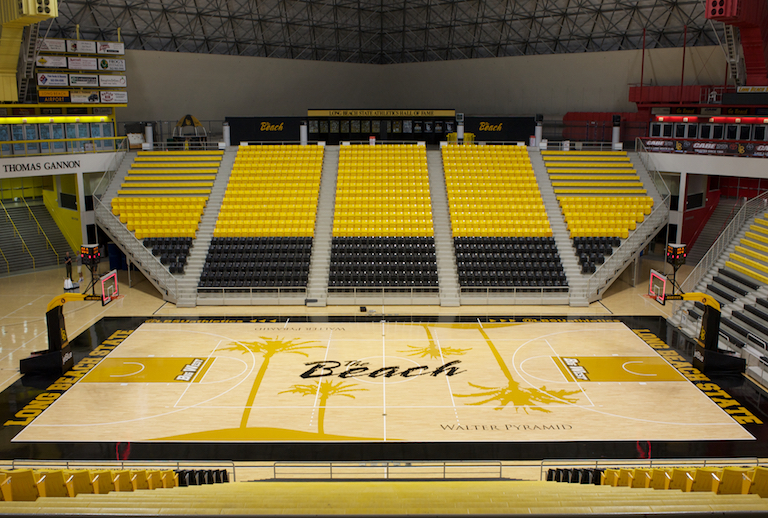 With Long Beach State’s campus situated just three miles away from the beach, the team decided to bring the sun and sand to their court design in 2012. With a sandy colored backdrop paired with golden palms and blue accents, the court itself is visually appealing. Add to that the gorgeous pyramid architecture of the building itself and this is easily one of the coolest courts around. 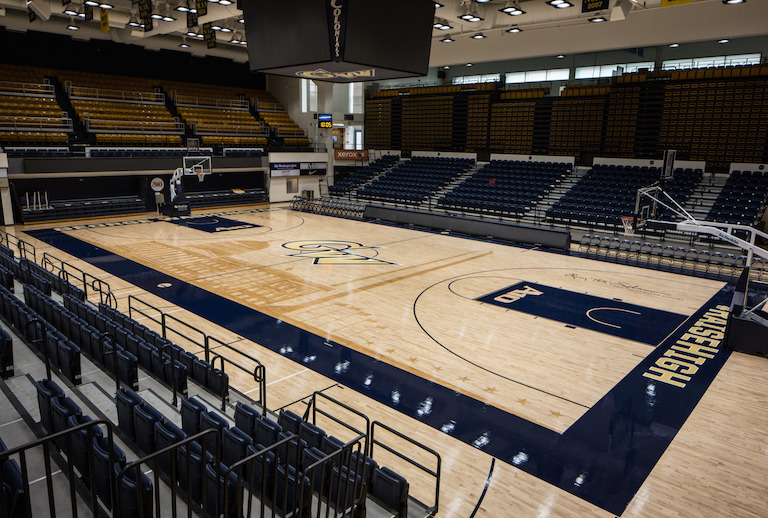 In 2013, George Washington took its redesign opportunity as a moment to honor Washington D.C.’s rich and lengthy history as our country’s capital. The striking new court features sepia silhouettes of historic architecture such as Capitol Hill, The White House and, naturally, the Washington Monument.  Watch the magic happen with this time lapse. 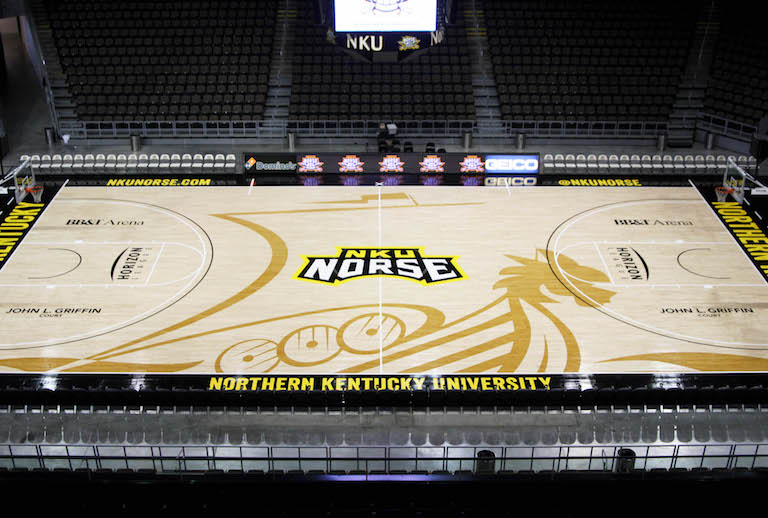 Recently, Northern Kentucky unveiled their new design as a chance to showcase the Norse brand by painting a gorgeous (and huge) Viking ship across the court. “The Norse ship rising through the sea is meant to serve as a metaphor for the uprising of the Northern Kentucky Athletics,” said athletic director Ken Bothof of the new look. 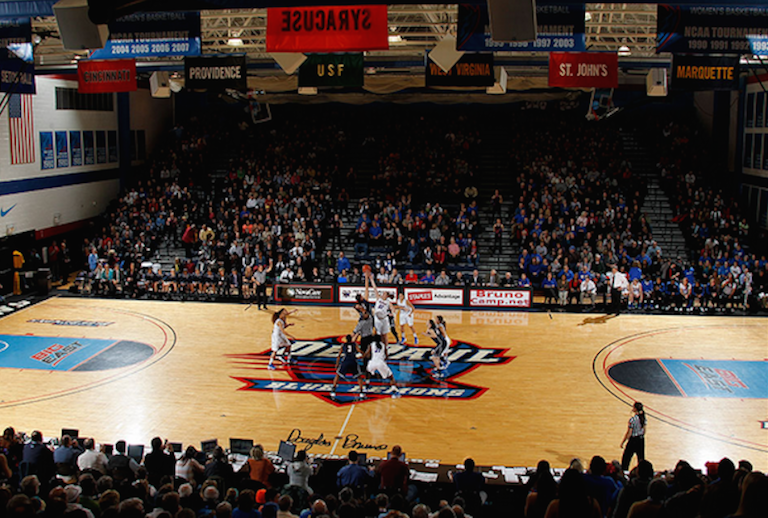 Though the Blue Demons will soon be playing in a totally new arena, there’s certainly something to be said of the renovated yet vintage court DePaul basketball fans have long called home. The simple design features the team’s blue as well as their easily identified logo in center court. Though nostalgia plays a role, it’s safe to say that fans are excited to see what the new McCormick Center holds for the team. 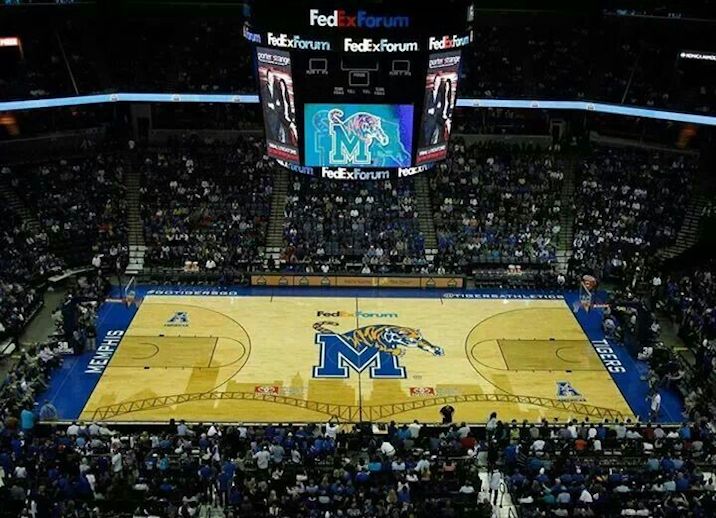 When it came time to redesign their court, the Tigers let the fans decide and it turns out, they’ve got great taste. After being given four unique design options, the fans cast their votes and opted for detailed silhouetted images of the Memphis skyline and the iconic Hernando de Soto Bridge. Check out the time lapse of the work they put in. 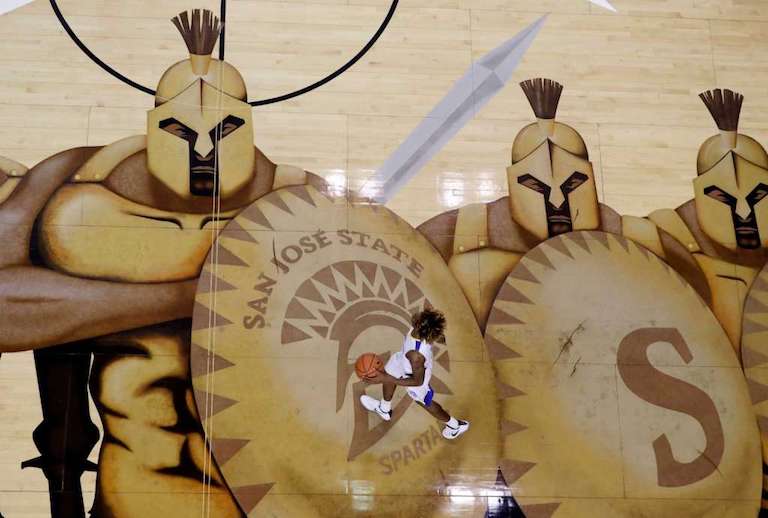 The San Jose State Center welcomes opponents with an undeniably intimidating view of five hulking Spartans ready to defend and protect their turf. Originally designed with four Spartans in mind, the fifth was added to represent the five players on the court. 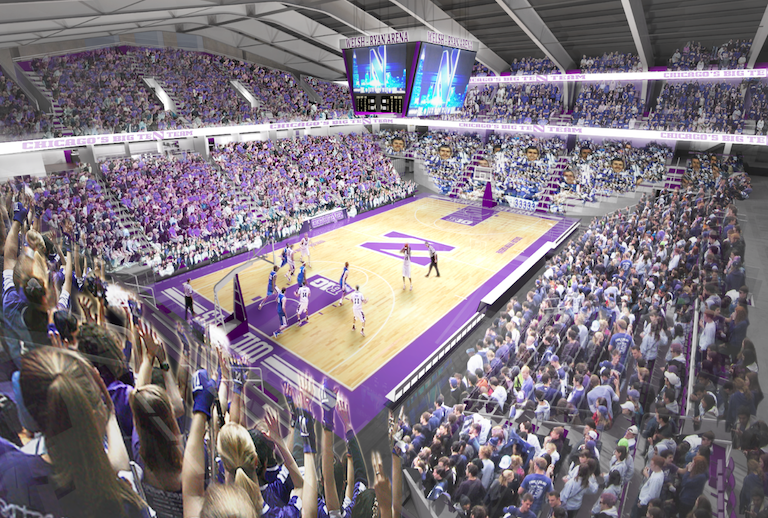 Unveiled in 2014, the new design features the “Northwestern Stripe” that had been incorporated into the the updated Wildcat’s uniforms. As one of the smallest (and oldest) arenas in college basketball, the royal purple accents really pop across the lightly stained hardwood floors. Currently under renovation, Northwestern fans are looking forward to a modern facelift. 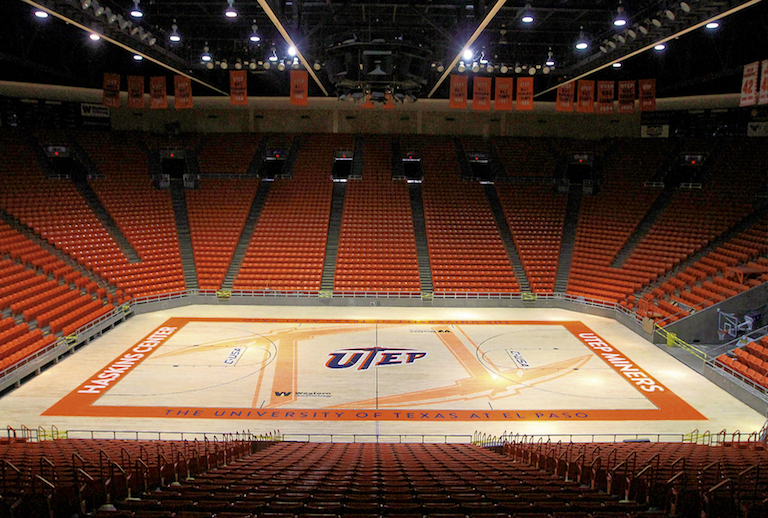 Love it or hate it, the University of Texas El Paso’s new design pays a fitting homage to the school’s mascot with its pair of bright orange, mirrored pickaxes. This design choice does a great job of honoring the Miners, as well as the women’s league. 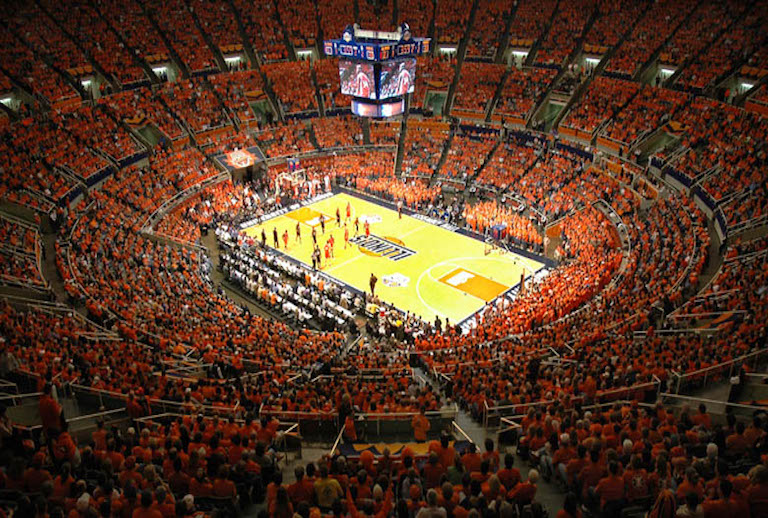 With the capacity for over 15,000, the newly renovated State Farm Center welcomes a sea of orange clad Illini fans with a revamp that includes both the team uniforms and court. The baseline lettering and outlined logo balance out the Illini orange with a bright blue that really makes the design pop across the tastefully stained floors.

View all posts by Joe Taylor →

Learn About Our Financing